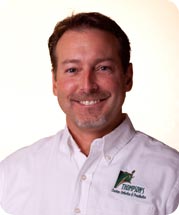 Jim is a Licensed and Certified Prosthetist Orthotist dedicated to providing the best possible treatments and outcomes in Spokane for the past 28 years.  He specializes in lower extremity Orthotics and Prosthetics with 28 years of pediatric experience and believes the team approach to rehabilitive health care is the best way to treat your patients.  As owner of Thompsons, it is also his resonsibility to help lead this talented group of practitioners and technicians and continue to do great things for our Inland Northwest Community.

In 1985, Jim was in an unfortunate accident aboard Coast Guard Cutter out of Los Angeles and lost his right foot below the knee.   With the support of his family and his dear wife Stacey, he pursued a career in Prosthetics and Orthotics.  After graduating from the University of Washington in 1994, Jim and Stacey moved to Spokane to start their family.  Jim purchased Thompsons the year 2000, which has grown to be the largest locally owned Prosthetics and Orthotics provider in the Inland Northwest.

Jim and Stacey enjoy everything the Nortwest has to offer trying to meet up with their two Children, Courtney and Michael, for camping/ski/bike/vacations as much as possible. Vince is the leader of our 5 person technical staff.  His personality and sense of humor is the perfect combination needed to be liaison between Practitioners and technicians.  Always staying positive seems to be one of many talents.

Born is Northeast Missouri, Vince moved to Spokane in 1986 and graduated from West Valley High in 1987.  He graduated from the Spokane Falls Orthotic and Prosthetic Technician program in 1992 and became a certified technician with the American Board of Orthotics and Prosthetics in 1995.  Vince, his wife Tish and their two children love living in the great Northwest.

Orthotics and Prosthetics have always been part of Vince’s life.  His father, Mike Wilson grew up with polio and spent over 30 years as an orthotist recently retiring as a highly respected Orthotic instructor at Spokane Community College. 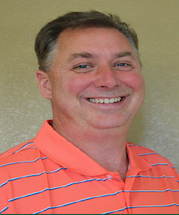 Andrew’s unique life experience has guided him to a satisfying career in providing prosthetics and orthotics devices.  After graduation from the University of Illinois, he moved to Seattle with his wife, Susan in 1992.

In 2001, Andrew suffered a major traumatic tibia plateau fracture while snow skiing.  He spent 69 days in the hospital and endured 18 surgeries.   The end result was below knee amputation.  Throughout his arduous recovery, he found inspiration from plethora prosthetic patients and decided to change careers.  He graduated with a Prosthetic degree from California State University in 2005.

Andrew learned empathy from his unique experience as a patient and clinician.  He tremendously enjoys applying his skills, education and experience to provide a custom solution for his patients.  He specializes in using the latest technology to provide successful solutions for his patient’s mobility deficiencies.  Additionally, Andrew thrives on treating patients suffering from recent limb loss.  He enjoys providing inspiration and motivation to his patients to accomplish their rehabilitation goals.   He takes extra time to listen to his patients and provide solutions for their individual needs.  Moreover, he embraces coordinated healthcare professional team approach for complete treating the patients.  For example, communicating with Physical Therapist regarding the patient’s gait training progression with the device. 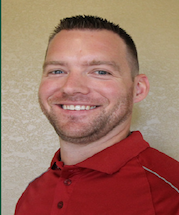 Cameron graduated from Washington State University in 2009 with a bachelors degree in Kinesiology and a minor in Psychology. He got introduced to the field while working at Cascade DAFO in the manufacturing lab. After working there for 3 years Cameron wanted to have a stronger influence on patient care and decided to pursue the field further. He received his Post- Bachelorette Certification in Orthotics and Prosthetics from Northwestern University in 2013.

Cameron moved to Spokane from Bellingham in January of 2014 to work at Thompson’s Custom Orthotics as a Resident Orthotist.  Cameron is now a board certified Orthotist and completed his prosthetics residency.

Cameron is looking forward to have a direct impact on patient care and improving people’s lives. Cameron enjoys spending time with his wife, Lauren and their 2 children, Camden and Addison. In his free time he likes to spend his time outdoors - camping, hunting and fishing. 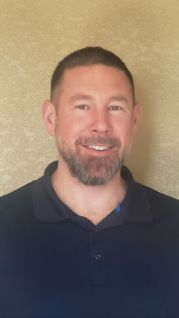 Rich holds a Prosthetics and Orthotics technical degree from SFCC in 2000 and also holds a P and O Bachelor's of Science degree from St. Petersburg College in Florida in 2007.  The understanding of the technical side for Prosthetics and Orthotics provides Rich with the Clinical confidence in handling the most difficult cases.  He takes a certain pride in being able to think " outside of the box" to facilitate the greatest outcome for his patients while using the highest technological advances in the field.

Rich is empathetic to his patient's needs and has a greater understanding of the daily struggles because he himself is a below-knee amputee of 41 years.  He is especially understanding of the need to be as active as possible while navigating all the beauty the Pacific Northwest has to offer.  Rich has two young active boys along with " Ellie" the yellow lab that accompanies them on all their adventures and exploring.  Not to mention the green thumb with a fantastic garden that occupies an acre of his property.  Rich is looking forward to helping you with any of your prosthetic and or orthotic needs. Rob was born and raised in Kitchener, Ontario, Canada and graduated from the University of Waterloo with a B.S. in Kinesiology in 1993. During his time at Waterloo, he played collegiate football where his interest in the field of Orthotics and Prosthetics began as he utilized several types of bracing during his career. After graduating, Rob made the move to the United States landing in Seattle and entered the field as a Certified Pedorthist. After many years, Rob decided to further his scope of practice and returned to school, graduating from Northwestern University's Orthotics and Prosthetics Program in 2013 in both disciplines. Rob is well traveled and has lived and worked in several cities across the United States, namely Seattle, Chicago and most recently, Johnson City, TN. In the last few years, Rob has had a desire to move back to the PNW. When a clinician opening at Thompson's Custom Orthotics presented itself in early 2021, he jumped at the opportunity.

Rob prioritizes patient care with solutions tailored to a patient's specific goals and needs. He also believes that staying on top of emerging technologies, constantly striving to learn as well as developing and expanding his expertise is important in order to provide the best possible care and outcomes for his patients. As a result, he finds joy in helping patients return to the activities that they enjoy.

Outside of work, Rob enjoys spending time with his two children, playing hockey and golf. Having just recently moved to the area, Rob looks forward to seeing all that Spokane has to offer and to reacquaint himself with the Pacific Northwest. Gabby recently graduated from University of Washington Masters of Prosthetics and Orthotics Program. She is originally from Cave Creek, Arizona and prior to admission in the MPO program, she received a bachelor's degree in Chemistry with a minor in Leadership Studies from Christopher Newport University in Virginia. She loves adventure, hiking, mountain climbing, running, art and exploring new places.

Having played sports her entire life, she is very passionate about helping people continue to live their life without limitations, whether it be competing in their favorite sport or having a healthy active lifestyle. Gabby is looking forward to improving her skills while striving to learn as much as possible during her prosthetic residency at Thompson’s Custom Orthotics and Prosthetics.

Please check your email for your authorization code.